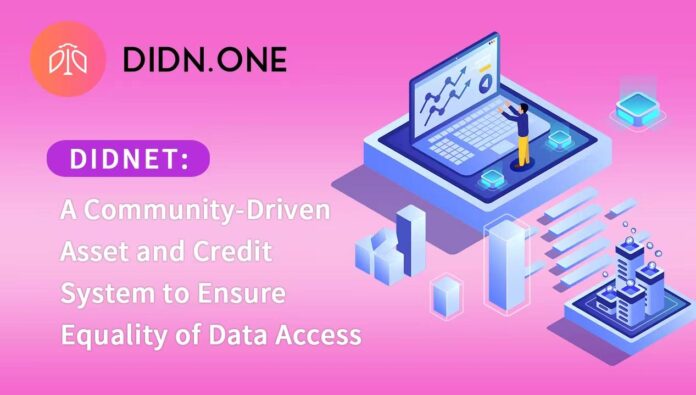 A project to exert the greatest community power in the blockchain industry.

Inequality of data access is one of the biggest challenges people face as the projects with substantial financial support shroud other blockchain projects taking advantage of unequal information and leaving behind the true concept of blockchain. For people who seek equality and are real supporters of the blockchain spirit, DIDNET (DIDN) has stepped forward to ensure equality of data access. DIDN aims to build a robust social network of real users in the virtual world.

DIDNET: A Platform Where Anyone Can Participate and Earn Incentives

DIDNET is an entirely community-driven encrypted asset and a credit system for those who seek fairness to break the inequality of data access. DIDN believe every person has a right to participate, and it incentivizes good behaviors.

Blockchain projects ensure the complete opening of data but do not provide equality of data access rights. Many people with limited funds and skills are excluded from gaining opportunities. It ultimately creates a new pattern of inequality.

DIDN prioritized the return of data ownership and access rights to its users. DIDN aims to be a project to exert the greatest community power in the blockchain industry. Any project or non-profit infrastructure can be connected to the actual user network built by the DIDN network.

The token economics of DIDN consists of two tokens; DXP and DID.

DXP token is more like a coin with the nature of accumulating points and has no cap on the total amount. DIDN uses this token as a pre-mechanism to ensure fair distribution with almost zero thresholds (excluding gas fees and other required tools). DXP also has many other use cases, such as it acts as a record and quantifiable certificate of users’ behaviors, credit points earned by users by participating in tasks and many more.

While DID token is a fully open-source ERC-20 standard token, the community’s native token. The circulating supply of DID will start from 0 and be activated and minted only through real users. DID has an upper limit, but the minting will stop at 10 million users, so no new DID will be minted after the ten millionth successful activation.

DIDN puts the power in the hand of the community, who can obtain tokens through account fission and increase the currency value through a huge number of community members instead of giving control to giant whales with huge capital.

DIDN focuses on rewarding the right behaviors with long-term value creation. The reward system in DIDNET is called mining because of the time factor involved in reward generation.

How Can Users Earn Rewards on DIDNET?

DIDN rewards users for their interaction and time spent on the social network. The process of getting/generating rewards on DIDN is simple. Users have to join the platform and follow certain variables, such as the time one can wait to generate rewards (lock-up period).

Users will be ranked based on when they joined the platform.

To earn increased rewards, users can invite more people to the platform and increase the days of the lock-up period.

To acquire DID tokens, users must activate more accounts through DID accounts. For activation, link the DIDNET through the BSC network. Each address will have 1,000 DXP; transfer DXP to the new account address and mine DID. 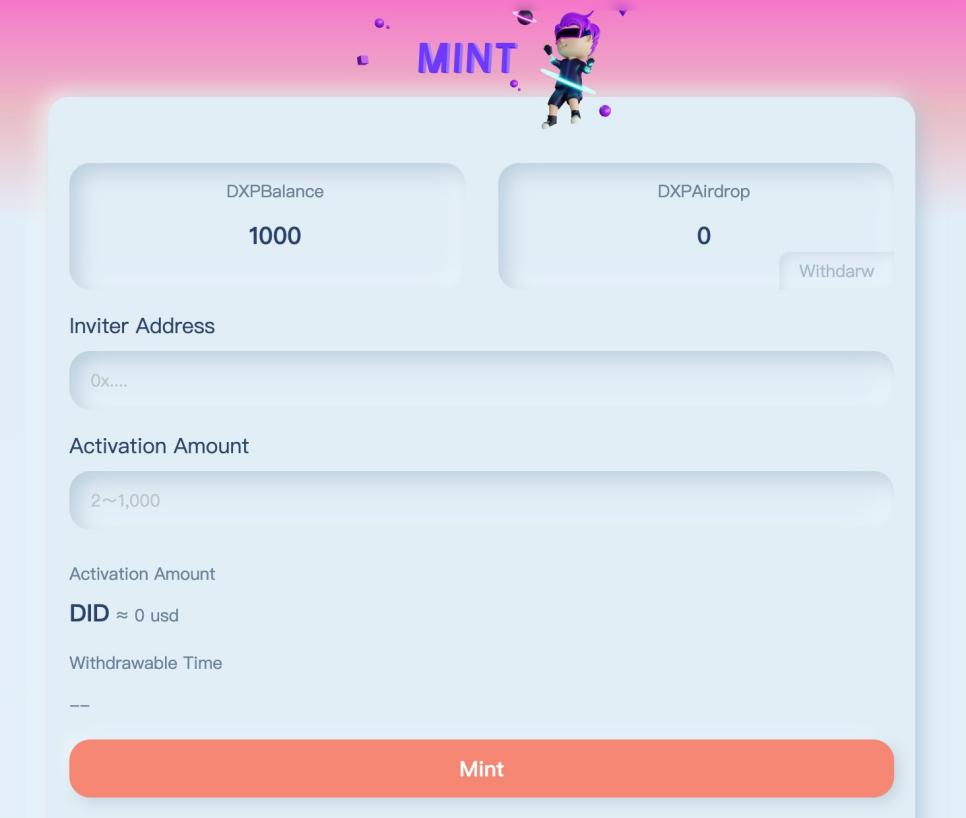 As shown in the picture above, enter the address of the person you want to invite and the number of activations, and click Mint.

To activate and unlock, the person you invite and transfer the coins to must also transfer them back to the transfer-out address (you) before it gets recognized as activated.

DXP tokens do not have a total amount limit and are mainly used for DID activation mining in the early stage. At present, the output of DXP is one block every 3 seconds, each block can produce 10 DXP, and about 288,800 DXP can be produced a day.

Users can get increased rewards by completing specific tasks in various campaigns. Recently DIDN has launched a USDT giveaway and DXP airdrop.

How to Participate in DIDN Airdrop?

To participate in the airdrop:

1-Connect your BSC wallet to get 1,000 DXP airdrop

2-Send the activation amount to the inviter to start mining on the DIDN website and click Mint.

3-Invite your friends to join DIDN by sharing your invite link.

4-Your referred friend also needs to transfer their DXP to you. In this way, you can get their DID mining power, also.

The more people you invite, the more DXP you can get and the more DID tokens you can mine.

Once activated accounts exceed 10 million, all DXP tokens in the coinage contract will be withdrawn into the DXP vault contract.

DIDNET has a clear roadmap and has a long way to go, while providing numerous opportunities for all users to earn rewards. Join the DIDN social relationship decentralized network today by inviting your friends!

PGPay set to start its public sale on 16th November on...

NBLS Coin entered the overseas market in May.